NUCLEUS:13 is a set of 13 vulnerabilities that affect Nucleus NET, the TCP/IP stack included with Nucleus, a real-time operating system (RTOS). The stack and the RTOS were originally developed by Accelerated Technology, Inc. (ATI) in 1993, then acquired by Mentor Graphics in 2002 and finally by Siemens in 2017.

Since its original release 28 years ago, Nucleus has been deployed in many industries and devices including medical devices / IoMT, vehicles, Industrial PLCs, IoT equipment and many more.

Why Is NUCLEUS:13 So Threatening?

The NUCLEUS:13 vulnerabilities can be used to take over, crash, or leak information from devices that run older versions of the Nucleus RTOS. Because of its wide use in over three billion devices, the potential attack surface of devices affected by these vulnerabilities is huge.

If a device with one of the NUCLEUS:13 vulnerabilities is exploited, attackers may be able to gain unauthorized access to a device or a network, remotely execute malicious code or launch a denial-of-service attack.

How to Mitigate the NUCLEUS:13 Threat?

Siemens, the owner of Nucleus, has released patches for all of these vulnerabilities. Device manufacturers who have implemented the TCP/IP stack or RTOS will have to release updates to their customers for the affected products.

But before moving on to patching, consider the following steps to make sure you address all impacted devices in your portfolio:

First you’ll need to check if your devices/products are indeed impacted by Nucleus:13. It would be really beneficial to have a repository of your product Software Bill-of-Materials (SBOM) and other product characteristics that also maps affecting vulnerabilities. 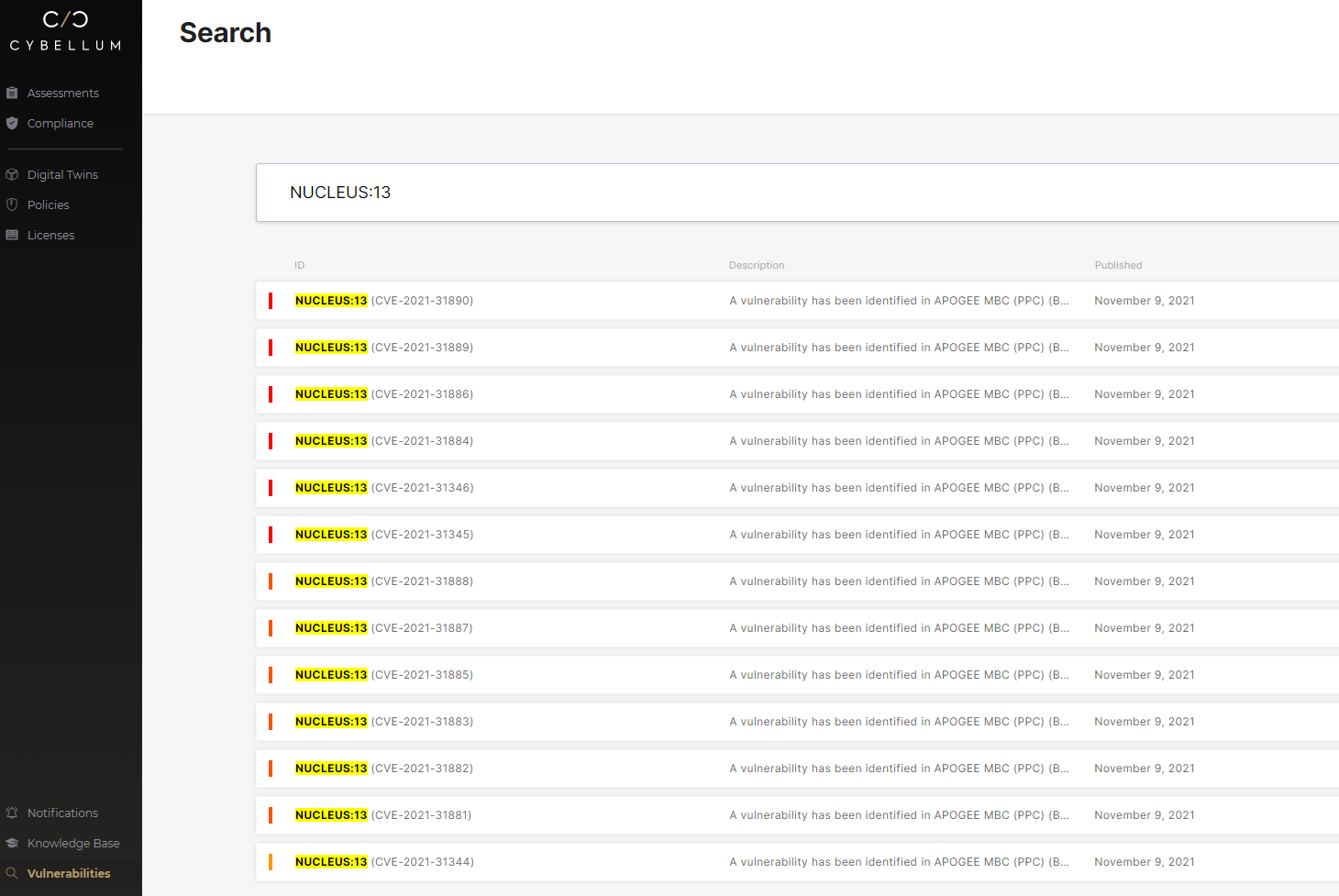 Searching for the Nucleus:13 CVEs with Cybellum

Once all affected products/devices have been identified you can move to the next step.

While patching may be difficult, it is still the number one action to take. Siemens Security Advisory SSA-044112 contains patching and remediation information.

It’s important to note that while that long term patch application process plays out, users of the device, such as utilities or hospitals, will still need to secure devices affected by NUCLEUS:13.

Device OEMs can help them in the interim by reconfiguring devices to minimize risk, for example, by disabling support for unused protocols.

It is common that, after a major vulnerability has been discovered, hackers find new ways of exploiting it or find similar (or related) security holes that could further compromise products.

Therefore, it is recommended that you monitor threats over time to ensure that the vulnerability has been removed.

How Can Cybellum Help?

Third-party software of an open-source or commercial nature pose a variety of software supply chain security challenges to connected device manufacturers. Nucleus:13 is yet another painful example.

Cybellum’s Product Security platform secures your software supply chain, with SBOMs and monitoring that validates the security of your device’s software from design through post-production.

Our experts can show you how. Talk to us or schedule a demo.